Some creature sketches for my next piece. I figured I might as well rant on this one since no one's going to read it anyway.

I've forgotten how fun creature design is as well as how convenient the tablet makes it. I decided to warm up with the help of a few extinct friends of mine, kronosaurus, basilosaurus, elasmosaurus, brachauchenius and, my personal favorite nightmare, plesiosaurus.

Of course the fundamentals of conceptual design--coupled with the fact that I do not have access to a working time machine--allowed me to take a few creative liberties with their appearances. Krono, for example, was given a more alligatored snout and armament; and I'm relatively certain the elasmosaur did not have spines. The line work was about three hours. I spent another hour giving them some designs and patterns but I felt the tones covered too much of the detail so pride made me cut that layer out. I was always a fan of plain linework.

As fun as creature design is I must admit I've become rather adamant, perhaps now more than ever, concerning the importance of hiding the monster in a storytelling scenario. I was immensely impressed with Gareth Edwards' 'Godzilla' in numerous ways but mainly his directorial choice to limit not only Big G's screen time rather than flaunt him around like a Transformer. That tsunami scene is still one of the most awesome, seat-teetering movie moment I've ever seen and you're only given a few extreme close ups of the King of all Monsters. Movie references aside it is my ever-strengthening belief that the less you show the monster the more horrific/awe-inspiring said monster is depending on the mood you've set for him/her. I'm all for a beast looking awesome and intimidating but quite honestly your monster is only as effective as how he is presented or more importantly how he is NOT presented (wow, all caps really DOES help emphasize a word).

Anyway this technique of teasing the audience with your monster, apart from sounding like a dirty euphemism, is an incredibly effective storytelling technique and one I intend to utilize in this upcoming piece.

I hope you've enjoyed my little bloggette. I'm off to find liquor. 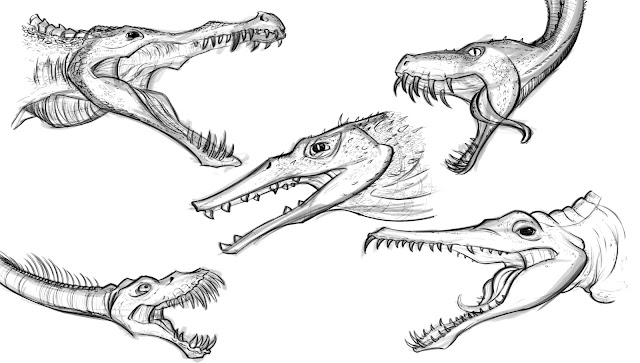