This piece hopefully emphasizes my ever-surfacing philosophy of hiding the monster. Originally the sea beast was fully silhouetted against the lightning but I found it much more eerie thinning up the shadow and letting glimpses of the detail peek through, particularly the eye. I'm also hoping the chaos of the scene will overshadow the dumb joke I threw in.

Speaking of subtlety--which we weren't, directly--I'd like to take a moment to explain the drabness in my titles. I like to think that I stay away from pretentious art cliches--I'm talking artsy shit, not necessarily the design concepts--which would include but is hardly limited to overzealous, over thought out names. I don't do that kind of hackneyed garbage any brain-dead dog could do were you to throw a paintbrush in its mouth; and I don't proceed to wrap it up in a stifling heap of philosophical jargon and pretentious ploys, polished with a meaningless name that sounds earthly rhythmic and romantically alluring but is in actuality the result of an hours worth of playing dictionary darts.

I don't do that; you couldn't pay me enough to do that (well you could but your family line would be broke). My art is about visual entertainment coupled with character-driven storytelling. It's as simple and complex as that; and this approach warrants very little attention to the naming convention. The titles aren't unimportant, unless you're comparing it to absolutely any other part of the art process. Were I to entitle this piece "Surfacing Redemption" or "Salacious Encumbrance" or "jcie4..ieo" or "flabbibibible" it shouldn't alter a thing; the piece is still what it is. To me it's like naming a shot from a storyboard.

I suppose I should be adding little snippets like this every time I post...though I can list at least a few hundred negatives for turning an art blog into a journal--hell, ANY kind of blog.

But I'm the cynical type. 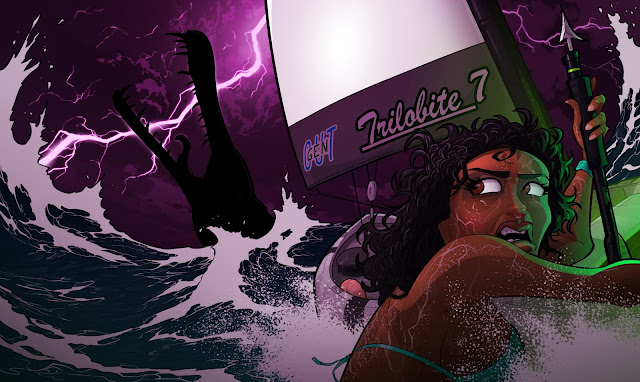